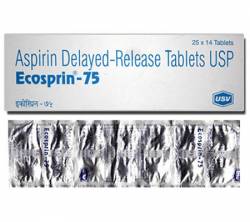 Ecosprin is also used long-term, at low doses, to help prevent heart attacks, strokes, and blood clot formation in people at high risk for developing blood clots. It has also been established that low doses of Ecosprin may be given immediately after a heart attack to reduce the risk of another heart attack and stroke.

Ecosprin used for the treatment of inflammation, fever, and pain that results from many forms of arthritis, including rheumatoid arthritis, juvenile arthritis, systemic lupus erythematosus, ankylosing spondylitis, Reiter's syndrome, and osteoarthritis, as well as for soft tissue injuries, such as tendinitis and bursitis. Ecosprin also is used for rapid relief of mild to moderate pain and fever in other inflammatory conditions.

Ecosprin should be taken with food. Usual doses for mild to moderate pain are 325 mg every 4 hours. Doses for rheumatoid arthritis include 325 mg every 4-6 hours. Heart attacks are prevented with 75, 150 or 325 mg daily.

Ecosprin is contraindicated in patients with a known allergy to class of drugs known as nonsteroidal anti-inflammatory drugs (NSAIDs), and in patients with the syndrome of asthma, rhinitis, and nasal polyps. Ecosprin may cause severe urticaria, angioedema or bronospasm.

The main undesirable side effects of Ecosprin are gastrointestinal ulcers, stomach bleeding, and tinnitus, especially in higher doses. In children and adolescents, Ecosprin is no longer used to control flu-like symptoms or the symptoms of chickenpox or other viral illnesses, because of the risk of Reye's syndrome.