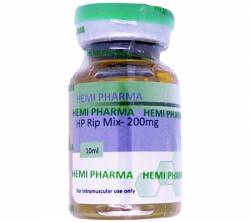 Testosterone Acetate is the major androgenic hormone that is responsible for the growth and development of masculine characteristics. It is produced in the Leydig cells (interstitial cells) of the testes. It regulates gonadotropic secretion and wolffian duct differentiation (formation of the epididymis, VAS deferens, and seminal vesicle), and stimulates skeletal muscle.

Testosterone Acetate is also responsible for other male characteristics and spermatogenesis after its conversion to dihydrotestosterone by 5alpha-reductase in peripheral tissue. Testosterone is converted to dihydrotestosterone in the target tissues where it appears to mediate many of the biological actions of testosterone. In addition, testosterone possesses protein anabolic properties, manifested by retention of nitrogen, calcium, phosphorus, and potassium, and is important in maintaining muscle mass and bone tissue in the adult male.

Drostanolone Propionate is a steroid with moderate anabolic properties. This steroid is most often used by bodybuilders who are preparing for a show due to the fact that the androgenic nature of it will give a hard, defined look to the muscles. Users of Drostanolone Propionate often report increases in strength and muscular stamina. It is also used by athletes in speed related and weight regulated sports, where it is a favorite due to its ability to produce good gains in lean muscle mass and strength with some reduction in body fat and minimal side effects. Drostanolone propionate cannot convert to estrogen, meaning that estrogenic side effects such as water bloat and gynecomastia shouldn’t be a concern when running this steroid.  It also produces a noticeable increase in muscle density and hardness – attributes necessary come contest time.

Trenbolone Acetate. Users of Trenbolone Acetate often report amazing gains in both strength and quality muscle mass, while the fat and water seems to "melt" off. This steroid is also a powerful fat burning aid, and lots of bodybuilders actually claim that the body will still drop bodyfat very quickly, even when one's diet isn't very clean. It is important to note that Trenbolone Acetate will shut one's natural testosterone production down very quickly, thus making a proper PCT protocol a must upon conclusion of a cycle.