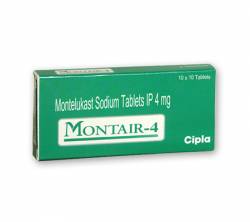 Montair belong to a class of medicines called leukotriene receptor antagonist (anti-asthmatic drugs). It blocks the action of certain natural substances (leukotrienes) that are involved in causing asthma and allergies. It makes breathing easier by reducing swelling in the airways.

Montair is used to treat and control symptoms in asthmatic patients by preventing the airways from narrowing. The active ingredient contained in these tablets is referred to as a leukotriene receptor antagonist (LTRA). It is systemically active and exhibits a dual mode of action, which means that it acts as an anti-inflammatory agent and a bronchodilator.

Leukotrienes are inflammatory eicosanoids produced by the body's immune system. They bind to recpetors in the airways and contribute to the inflammation of the lungs and airways, as well as the secretion of mucous in patients with asthma. By inhibiting the activity of leukotriene D4 on the CysLT1 receptor. Because of this, the leukotrienes are prevented from tightening the airways, which causes them to narrow. This in turn improves breathing and helps provide control over asthma. Patients have been treated with this medicine as an alternative to corticosteroids or to prevent bronchospasms caused by exercise. If effective control of asthma is not achieved with other medicines, some doctors may recommend using these tablets to control symptoms.