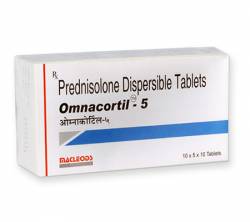 Omnacortil is a gastro-resistant tablet that contains an active ingredient. Omnacortil makes to decrease inflammation by acting within cells that can prevent from releasing a certain chemicals that are important to the immune system.

Omnacortil is made of Prednisolone which has a form of a tablet that varies from different weight of 5 mg, 40 mg, and 20 mg.

Omnacortil may show some side effects some of these are raised blood sugar level, increased susceptibility to infections and increased severity of infections, menstrual disturbances, sodium and water retention, effects on the skin, such as skin thinning, impaired healing, acne, bruising, stretch marks, increased sweating, change in pigmentation, increased hair growth, muscle weakness or wasting, increased appetite, psychiatric reactions, such as mood changes and weight gain and increased of blood pressure. If these symptoms shows up ask for immediate help from doctor.

Omnacortil should be stored at room temperature and away from light and moisture. This must keep out of reach from the children and pets.